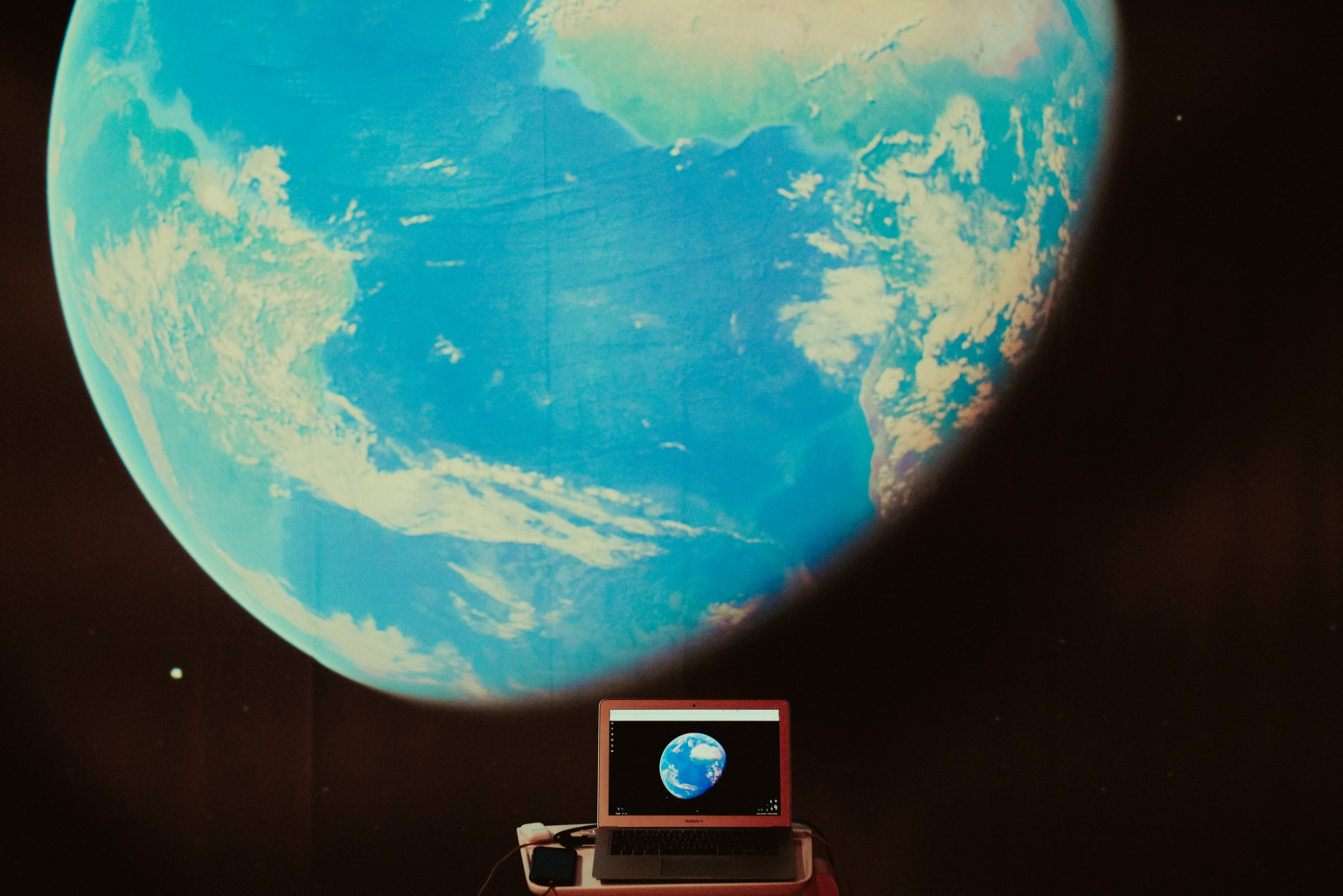 My Documents is a lecture performance programme where artists from different backgrounds present personal research, a radical experience, a story that secretly obsess them. My Documents has a minimal format: artists with their documents. A way of bringing to light the kind of research that often gets lost in a nameless folder in a computer.

The programme seeks to delve into the genre in search of a contagion among conceptual art, research, and theatre. A space where speeches, formats and audiences from different disciplines can come together.

The program has been held since 2012 in Buenos Aires, Vigo, Milan, Lisbon, with artists from different disciplines.

For My Documents | Share your screen, Lola Arias invited several artists, from dance, documentary film, visuals arts and theatre to delve into their personal archives. In this new global version, artists from different parts of the world will be virtually there, in their new domestic stage, showing their archive on a shared screen with the audience. The audience can see the performance live, make comments and exchange visions and insights afterwards.

In Doing It, the Portuguese actor and director Pedro Penim confesses a secret passion that takes him very far across the sea of the internet. In Make me stop smoking, the Lebanese writer and director Rabih Mroué reconstructs the radical heterogeneous landscape of Lebanon, destroyed by crises and wars, with the aid of countless anonymous and personal documents*. In Blue House, the Chinese dancer and documentalist Zhang Mengqi shares her diary of the time she was locked in quarantine in Hubei province, as well as her art experiments in her father’s village. In Or All Your Changes Will Be Lost the English writer and director Tim Etchells investigates his own physical and digital notebooks, in which he has gathered written materials of different kinds for more than 35 years. In Lázaro, the Mexican theater company Lagartijas Tiradas al Sol reconstructs the story of an actor who decides to change his face and name and  become someone else.

* Rabih Mroué was invited as a guest with his non-academic lecture Make me stop smoking, a piece produced by Ashkal Alwan – Beirut, with the support of International short film festival Oberhuasen, 2006.

Arias’ productions play with the overlap between reality and fiction. “Sitting in the theatre, wandering a site-specific location or watching a film, we are inculcated into others’ narratives, wound into their complexities, joys and disappointments. At the same time, we are also invited and at times confronted, in an extraordinary and acute way, to reflect on the contingencies and fragilities of our own stories, individual and collective, as well as on our shifting, unresolved relation to the precarious and dangerous machinery that is social and political history.” (Etchells, in Re-enacting Life, 2019).

Between 2001 and 2007 she wrote and directed six fictional pieces The Squalid Family, Studies of Loving Memory, Poses for Sleeping and the trilogy Love is a Sniper, Revolver Dream and Striptease.

Since 2007 she has worked in the field of documentary theatre, creating over twelve plays in collaboration with people who have lived through different events or historical experiences. People who have, one way or another, survived.

My Life After (CTBA, Buenos Aires, 2009) is based on the biography of six performers who re-enact their parents’ lives during the dictatorship in Argentina. Familienbande(Münchner Kammerspiele, Munich, 2009) deals with role models in a contemporary family with three parents. That Enemy Within (HAU, Berlin, 2010) is a project about identity made in collaboration with two identical twins. The Year I was Born (Teatro a Mil, Santiago, 2012) is based on biographies of people born during Pinochet’s dictatorship. Melancholy and Demonstrations (Wiener Festwochen, Vienna, 2012) is a play about her mother’s depression. The Art of Making Money (Stadttheater Bremen, 2013) takes a concept from The Threepenny Opera by Brecht for a play performed by beggars, prostitutes and street musicians from the city of Bremen. And The Art of Arriving (Stadttheater Bremen, 2015) uses the example of Bulgarian kids living in Germany to develop a scenic tutorial that reflects on how to start a new life in another country.

Her most recent plays are Minefield (Royal Court Theatre, London, 2016), which brings together British and Argentinian veterans of the Falklands/Malvinas War to share their experience of the conflict and life since then, Atlas des Kommunismus(Maxim-Gorki Theatre, Berlin, 2016), which gathers stories of women between the ages of 8 and 84 with backgrounds in the GDR, What they want to hear (Münchner Kammerspiele, Munich, 2018), the reconstruction of the real case of a Syrian archaeologist trapped in German bureaucracy without any legal status for four years, and Futureland (Maxim-Gorki Theatre, Berlin, 2019), a science-fiction documentary piece with unaccompanied minors, teenagers who escaped from war, poverty and violence and travelled to Germany on their own.

Lola began her film career with the video installation Veterans (Battersea Art Centre, London, 2014), the starting point of her multi-disciplinary art project about the Falklands/Malvinas War. In this series, veterans reconstruct their experience of the war in a space they inhabit in the present day.

Her first feature film Theatre of War (2018) was selected for the 68th Forum of the Berlinale Film Festival and received several prizes including the CICAE Art Cinema Award, the International Confederation of Art House Cinemas Award and the Prize of the Ecumenical Jury. Arias also won the Best Director Award at the 20th BAFICI Festival in Buenos Aires and the film received the Movistar+ Prize for Best Documentary Film at Documenta Madrid and the Silver Condor Award for Best Adapted Script.

Arias is currently working on her next film Reas [working title], supported by IDFA Bertha Fund and selected for the Pitching du Réel at the Visions du Réel Festival, which brings together the stories of women and trans people in Ezeiza Prison, Buenos Aires, reinventing the musical genre in documentary form, mixing scenes and stories from the inmates’ real lives with music and choreographies.

In the visual arts and curating field, she developed My Documents (Buenos Aires, 2012-2017; Milan, 2018; Lisboa, 2020), a lecture-performance cycle where artists from different backgrounds present personal research, a radical experience, a story that secretly obsessed them. She also conceived the durational performance Audition for a Demonstration (Berlin, 2014; Athens, 2015; Prague, 2015; Buenos Aires, 2017; Berlin, 2019); she created the exhibitions Stunt Double (Buenos Aires, 2016), in which four different installations rebuilt the last 40 years of Argentinian social and political history through documents, reenactments, interviews and popular songs; and Ways of walking with a book in your hand (Buenos Aires, 2017), a site-specific project for readers in libraries and public spaces.

With Ulises Conti she released the albums Love is a sniper (2007) and Those who do not sleep (2011), and with Stefan Kaegi she developed the projects Chácara Paraíso(2007), Airport Kids (2008) and Ciudades Paralelas (2010), a festival of urban interventions in Berlin, Buenos Aires, Warsaw, Zurich and other cities.

She has published poetry, fiction and plays: Love is a sniper (2007, Entropía), The postnuclear ones (2011, Emecé), My Life After and other plays (2016, Penguin Random House) and a bilingual edition of her play Minefield (2017, Oberon Books). In 2019, Performance Research Studies published Re-enacting Life, a book that gathers articles, screenplays and documents from her whole career.

Watch MY DOCUMENTS | SHARE YOUR SCREEN from March 1st to March 15th 2022 on the Segal Center Film Festival on Theatre and Performance (FTP) website.

Read more about Lola Arias and MY DOCUMENTS | SHARE YOUR SCREEN at (https://lolaarias.com) or get in touch at lolaariascompany@gmail.com