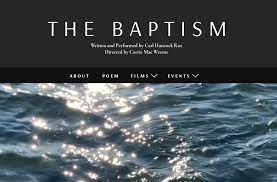 STREAM THE FILMS AND INTERVIEWS HERE

Carl Hancock Rux is an American poet, playwright, novelist, essayist, recording artist, actor, theater director, radio journalist, a frequent collaborator in the fields of film, modern dance, and contemporary art; and senior-level arts administrator, and educator. He is also a frequent collaborating artist, appearing on the title track of Gerald Clayton’s album “Life Forum”[1] (Grammy nomination for Best Jazz Instrumental Album) as well as many other jazz and experimental music projects. His own music has been released internationally on several labels including Sony/550, Thirsty Ear, and Giant Step. Rux is the author of several books including the Village Voice Literary Prize-winning collection of poetry, Pagan Operetta, the novel, Asphalt, and the Obie Award-winning play, Talk. The NY Times identified Rux as “a breathlessly inventive multimedia artist” focused on “art, race, memory, and power.” Mr. Rux is also co-Artistic Director and Board member of Mabou Mines, a New York City-based experimental mixed media art and social service company founded in 1970 by David Warrilow, Lee Breuer, Ruth Maleczech, JoAnne Akalaitis, and Philip Glass; Board member of 122LCC; Associate Artistic Director/Curator in Residence of Harlem Stage, The Gate House; and Multidisciplinary Editor at The Massachusetts Review, a literary quarterly founded in 1959 by a group of professors from Amherst College, Mount Holyoke College, Smith College, and the University of Massachusetts Amherst, as well as the recipient of a 2021 Whiting Award Literary Magazine Prize from the Whiting Foundation, for its attentive and daring editorship in a time when the literary arts have been overshadowed by political and social strife. Mr. Rux is the recipient of numerous awards including the Doris Duke Award for New Works, the Doris Duke Charitable Fund, the New York Foundation for the Arts (NYFA) Prize, the Bessie Award, the Alpert Award in the Arts, and a 2019 Global Change Maker award by WeMakeChange.Org. Mr. Rux’s archives are housed at the Billy Rose Theater Division of the New York Public Library, the Archives of American Art, Smithsonian Institution as well as the Film and Video/Theater and Dance Library of the California Institute of the Arts, where he is the former Head of the MFA Writing for Performance Department and currently serves as a faculty member.

As a performer/actor, Mr. Rux originated the lead role in the opera, The Temptation of Saint Anthony, directed by Robert Wilson, composed by Bernice Johnson Reagon, which had its world premieres at The Paris Opera Garnier, Sadler’s Wells in the UK, and the Brooklyn Academy of Music.

As a musician/recording artist, his work is known to encompass an eclectic mixture of blues, rock, vintage R&B, classical music, futuristic pop, soul, poetry, folk, psychedelic music, and jazz. His debut CD, Rux Revue was recorded and produced in Los Angeles by the Dust Brothers, Tom Rothrock, and Rob Schnapf, and his sophomore cd, Apothecary Rx, was selected by French writer Phillippe Robert for his 2008 publication “Great Black Music: An Exhaustive Tribute to 110 Albums . His fourth studio CD, Good Bread Alley, was released by Thirsty Ear Records, and his fifth “Homeostasis” (CD Baby) was released in May 2013.

Carrie Mae Weems (Director) is a MacAthur fellow and American artist working in text, fabric, audio, digital images and installation video, and is best known for her photography. She achieved prominence through her early 1990s photographic project The Kitchen Table Series.

Meshell Ndegeocello (composer) Michelle Lynn Johnson, better known as Meshell Ndegeocello is a German-born American singer-songwriter, rapper, and bassist. She has gone by the name Meshell Suhaila Bashir-Shakur which is used as a writing credit on some of her later work.Her music incorporates a wide variety of influences, including funk, soul, jazz, hip hop, reggae and rock. She has received significant critical acclaim throughout her career, being nominated for eleven Grammy Awards, and winning one.She also has been credited for helping to “spark the neo-soul movement”.

Brian Eno (composer)
Brian Peter George St John le Baptiste de la Salle Eno (15 May 1948) is a British musician, composer, record producer and visual artist best known for his pioneering work in ambient music and contributions to rock, pop and electronica.A self-described “non-musician”, Eno has helped introduce unique conceptual approaches and recording techniques to contemporary music. He has been described as one of popular music’s most influential and innovative figures.
Born in Suffolk, Eno studied painting and experimental music at the art school of Ipswich Civic College in the mid 1960s, and then at Winchester School of Art. He joined glam rock group Roxy Music as its synthesiser player in 1971, recording two albums with the group then departing in 1973 amidst tensions with the group’s frontman Bryan Ferry. Eno recorded a number of solo albums beginning with Here Come the Warm Jets (1974). In the mid-1970s, he began exploring a minimalist direction on releases such as Discreet Music (1975) and Ambient 1: Music for Airports (1978), coining the term “ambient music” with the latter.

Explore projects created under The Baptism from March 1st to March 15th 2022 on the Segal Center Film Festival on Theatre and Performance (FTP) website.

Support this project by Carl Hancock Rux, Carrie Mae Weems and Lincoln Center by making a direct donation to them at the following details: carlhancockrux@gmail.com

Read more about Carl Hancock Rux, Carrie Mae Weems and Lincoln Center and The Baptism at (https://carlhancockrux.com) or get in touch at carlhancockrux@gmail.com / Facebook@carlhancockrux

Need help with the Commons? Visit our
help page
Send us a message